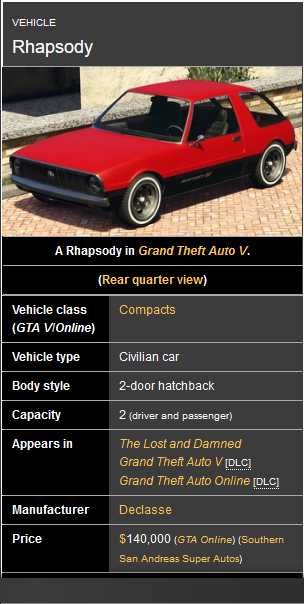 "Nothing says post-irony like a retro futuristic American jelly bean car. Small with a wide glass ass to showcase your samurai bun and allow for 360 degree Snapmatic photography."
―Southern San Andreas Super Autos description.
The Declasse Rhapsody is a two-door hatchback featured in the GTA IV DLC The Lost and Damned, Grand Theft Auto V, and Grand Theft Auto Online as part of the "I'm Not a Hipster" Update.

The Lost and Damned[edit | edit source]

The car is based on the infamous AMC Pacer manufactured from 1970–75, while the front is designed after the Volkswagen Golf Mk1. The wheels appear to be after market, bearing a resemblance to American Racing Ansen Sprint mag wheels. 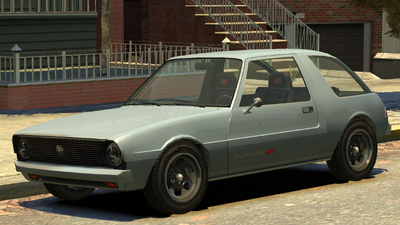 The Lost and Damned[edit | edit source]

The car handles similarly to the Blista Compact, although the Rhapsody is an FR layout vehicle, (as opposed to the Blista Compact's FF layout) with more reasonable torque, and lower top speed. Its handling is very good, as its light weight and stiff suspension allow it to take turns at a high speed with almost no oversteer. However, crash deformation is poor, and as expected from a vehicle of this size and weight, its engine will fail after 3-4 head-on crashes. It is, however, very back-heavy and is prone to spinouts, but this trait can be good for drifting in the hands of experienced drivers.

The Rhapsody's performance virtually is unchanged in GTA V, with only minor alterations to the vehicle's rigidity and nimble-feeling, where it now feels more stiff and stable, as oppose to TLAD's rendition where the car felt slightly more loosely suspended.

The car is a reference to Wayne's World where characters Wayne Campbell and Garth Algar. played Bohemian Rhapsody while travelling in an AMC Pacer

Retrieved from "https://gtacarswiki.fandom.com/wiki/Rhapsody?oldid=91"
Community content is available under CC-BY-SA unless otherwise noted.